Audubon Birdwalk at Bridge over the Rio Laja 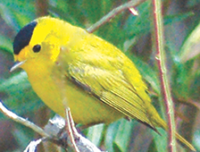 On the 21st, with leaders Luke Rich, Norman Besman and Signe Hammer we’ll head to the bridge over the Rio Laja at Montecillo de Nieto, just past the back road into Atontonilco.

We’ll spot birds both from the bridge and along the banks of the river. Last year at this site we were treated to some rare sightings: an Indigo Bunting and two different flycatchers: Ash-throated Flycatcher and Eastern Phoebe. 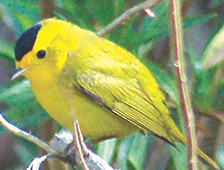 We found birds that like a watery habitat, including our resident Green Kingfisher, Great Egret, Black-crowned Night Heron and Black Phoebe, a small flycatcher.

Other resident flycatchers we saw included the small, striking Vermilion Flycatcher as well as the big, flashy Great Kiskadee and almost-as-big but slightly less flashy Cassin’s Kingbird, both of whose loud voices are unmistakable.

We found a beautiful orange-and-black Black-headed Grosbeak, too, as well as a red-crowned Ladder-backed Woodpecker, a tiny White-collared Seedeater and gorgeous, crested Phainopepla.

Among the winter visitors we saw last January were Yellow-rumped and Wilson’s warblers, Clay-colored Sparrows and Ruby-crowned Kinglets. This month we’re likely to see Lark Sparrows, as well. 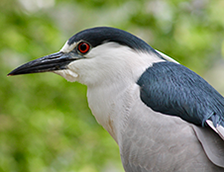 Finally, plan to keep an eye on the sky, where last year at this time we saw a Northern Harrier, a Common Raven and a Turkey Vulture. We could also see both Cooper’s and Sharp-shinned Hawks, a wintering American Kestrel and a Crested Caracara.
The walk is open to all birders, beginning and experienced alike. Wear comfortable, sturdy walking shoes and bring water and a hat. We’ll have our Audubon de México bird guide, Birds of San Miguel—with 81 species commonly found in the San Miguel area—for sale. Our guides carry telescopes so that everyone can see distant birds clearly, and we’ll also have a few pairs of binoculars to lend.

Carpooling is essential, so if you have a car, please bring it. Plan to arrive at 7:45, as we leave promptly at 8. You’ll be back by noon.